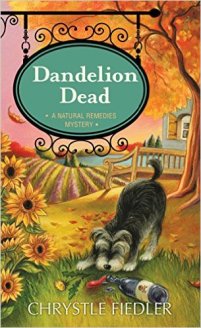 Chapter One:  I absolutely love edible plants, many of which are also my favorite natural remedies. But I don’t mean fruits and vegetables. I mean weeds that are usually perceived as a nuisance and something to be “rid of,” but are, in fact, packed with nutrients and have amazing healing powers. Take the much-maligned dandelion, for example. Believe it or not, it’s actually chock-full of good-for-you vitamins and minerals, including magnesium, vitamins C and E, iron, potassium, and calcium, and can be used to make everything from smoothies to salads. I’d been fascinated by edible plants ever since my late aunt Claire Hagen handed me her dog-eared copy of naturalist Euell Gibbons’s book Stalking the Wild Asparagus when I was fifteen years old. An instant hit when it was first published in 1962, it provided a blueprint that anyone could follow to find, gather, and prepare wild foods.

After giving me the book, Claire encouraged me to go along with her as she foraged for wild edibles in the fields and woods of the North Fork, on the East End of Long Island, New York. I was born out here, in Greenport, and Claire moved here after living in London for many years, where she worked as an editor for British Vogue. My passion for edible plants and natural remedies came from her, and twelve years later, I was just as fascinated.

For this reason I was out in the fields teaching a class in edible plants early Sunday morning in October, a week before Halloween. Fall was one of my favorite seasons and a prime time to be out in nature, identifying and foraging to my heart’s content. Fall was also the North Fork’s best-kept secret. Not only were the summer tourists gone, and the beaches and the woods empty, the weather was cool, with just a little nip of cold, signaling that winter was on its way, but not here just yet.

My latest project, a medicinal herb garden dedicated to Claire, opened last year and had turned out to be a smashing success. This despite my finding a dead body near the digitalis plants, on the opening day of the annual Maritime Festival. Fortunately, with the help of my boyfriend and ex-cop, Jackson Spade, and my ex-boyfriend, television writer-producer Simon Lewis, we brought the killer to justice. The garden became a popular place to visit, and I kept busy leading tours several times a day along with running the health food store I’d inherited from Claire, Nature’s Way Market & Café on Front Street.

Now, with the cooler weather, the garden had turned dormant, rejuvenating and regenerating itself for spring. So, in the off-season, I’d turned my attention to my workshops in Nature’s Way on how to benefit from edible plants, and other natural remedies, for health and wellness.

This morning we were foraging in the fields behind Jackson’s house and animal sanctuary, far from the road, and away from exhaust fumes and nasty chemicals that could contaminate any plants we picked. Each class participant had a copy of one of Claire’s most popular books, the Edible Planet, which featured twenty-five commonly used plants complete with color photographs.

The first rule of foraging was to be absolutely certain in plant identification, and the photos helped ensure this. While most plants were safe and helpful, poisonous plants also exist, and we wanted to avoid these. I led the group, which was made up of ten women of various ages, some local, some from New York, and few from a day trip from Connecticut across the Sound. Lily Bryan[SHB1] , twenty-five, my new assistant at Nature’s Way, was also here.
Lily had graduated from the New York Culinary Institute in June and hoped to open her own restaurant on the East End one day. Lily was intelligent, motivated, and a hard worker—much like her uncle, Wallace Bryan[SHB2] , my manager—and an enthusiastic student. I was glad to have her along today.

We continued to head East across the fields as the early-morning sunshine slanted through the trees at the north edge of Jackson’s property, and birds wheeled and chattered overhead. A few feet later, I spotted a cluster of yarrow, a plant with firm, compact lacy white flower clusters on top of long, elegant green leafy stems.

“This is good start,” I said as I got on my knees and examined it, and the group gathered around me.

“Yarrow is one of my favorite herbs, especially in the fall. You can make a lovely cup of tea with its leaves if you have a cold, and it’s also relaxing and a mild pain reliever. This was also one of my aunt’s favorite edibles, and there’s a section on it in the back of your book that will tell you more about it.” I paused as everyone found the section.

“There’s plenty of it here, but we never take more than we need,” I said. “But since we’ll be using the leaves, flowers, and stem, I’ll take this plant whole.” I used my spade to gently dig it up and handed it to Lily, who put it in the big blue bucket that she always carried when foraging.

“Now, at our next class, on Monday morning, I’ll show you how to use these to make tea and a yarrow, calendula, and oatmeal facial. So, we need to find calendula next. Let’s turn to that page in your book and start looking for it.”

The group eagerly began to search for calendula plants, which sported bright yellow and orange flowers. “Some people say that calendula glows like the sun,” I continued. “It’s a member of the daisy family, also known as English marigold. It’s one of my favorite edibles. We can use it in the facial, but it also adds taste and color to salads and other dishes.”

As we continued to head in an easterly direction, we moved beyond Jackson’s property to the parcel next door, and the Pure vineyard. I had permission to forage here as well, since the property belonged to Simon. Simon had purchased the winery a year ago, as an investment, with David Farmer, a talented winemaker who came from one of the first families of winemaking on the East End. Together they had turned the vineyard into an organic, sustainable winery using biodynamic methods and native yeast, powered only by wind and sun.

Today was important for Pure and all the vineyards on the East End—the first day of North Fork UnCorked!—a weeklong affair that featured wine tours, tastings, and events from Riverhead to Orient, sponsored by the Long Island Wine Council and Farm to Table magazine. Pure and other wineries were competing for the title of best North Fork vintage, and a cash prize of $200,000. The judging of individual wines produced by the vineyards would take place throughout the week, and the winner would be announced a week from today, at a gala ball at historic Southwold Hall.

Simon’s winery was the clear front-runner in the competition. Not only was his vineyard the first on the East End to grow and make organic wine, but his vineyard had already nabbed several top awards this year and had received a ton of positive press. Of course, the rival vineyards were jealous. But facts are facts, and David Farmer was now widely regarded as one of the up-and-coming winemakers out here and in the United States.

This afternoon, Simon was hosting a cocktail party and tasting for the editor of Farm to Table magazine at Pure and had asked Nature’s Way to cater it for him. So, along with teaching my class this morning, both Lily and I were on the lookout for tasty edible plants to add to the menu.

An hour later we’d discovered not only calendula, but chamomile and mint, and Lily had added few handfuls of dandelion greens for garnish. While she led the class back to Greenport and Nature’s Way, I headed over to see Simon in his office at Pure to discuss last-minute preparations for party.

Business is blooming at Nature’s Way Market & Café, and shop owner, holistic doctor, and amateur sleuth, Willow McQuade has never been happier. Her new medicinal herb garden is a hit, and so is her new book, she’s in love with ex-cop and animal sanctuary founder Jackson Spade, and enjoying teaching seminars about edible plants and natural remedies.

But everything changes when Willow’s old boyfriend and TV producer, Simon Lewis, winemaker David Farmer, and his wife Ivy, ask her to cater a party at Pure, their new organic vineyard, to kick off North Fork’s Uncorked! week and the competition for Wine Lovers magazine’s $200,000 prize. Pure’s entry, Falling Leaves, is the favorite to win, and the wine flows freely until after Simon’s toast when smiles give way to looks of horror. Ivy’s twin sister, Amy has been murdered! Turns out, the poison that killed her was actually meant for David. But who wants him dead? A rival vintner? Or someone closer to home? This time the truth may be a bitter vintage to swallow.

About the Author:
CHRYSTLE FIEDLER is a freelance journalist specializing in natural remedies, alternative

medicine and holistic health and healing, and is the author of the Natural Remedies Mysteries series. Her many consumer magazine articles have appeared in USA Today’s Green Living, Natural Health, Remedy, Mother Earth Living, Spirituality & Health, and Prevention. She is also the author/co-author of seven non-fiction health titles including the Country Almanac of Home Remedies with herbalist Brigitte Mars, and The Compassionate Chick’s Guide to DIY Beauty with Vegan Beauty Review founder, Sunny Subramanian. Chrystle lives on the East End of Long Island, NY in a cozy cottage by the sea. Visit http://www.chrystlefiedlerwrites.com.

In a spicy cozy mystery filled with herbal remedies readers will love, a sustainable winery becomes the backdrop for murder! Fortunately, solving crimes comes naturally to charmingly unconventional homeopath and amateur sleuth Willow McQuade, as she looks for clues that will reveal a killer’s true essence.

Business is blooming at Nature’s Way Market & Café, and shop owner, holistic doctor, and amateur sleuth, Willow McQuade has never been happier. Her new medicinal herb garden is a hit, so is her new book, she’s in love with ex-cop and animal rescuer Jackson Spade, and enjoying teaching seminars about edible plants and natural remedies.

But everything changes when Willow’s old boyfriend and TV producer, Simon Lewis, winemaker David Farmer, and his wife Ivy, ask her to cater a party at Pure, their new organic vineyard, to kick off North Fork’s Uncorked! week and the competition for Wine Lovers magazine’s $200,000 prize. Pure’s entry, Falling Leaves, is the favorite to win, and the wine flows freely until after Simon’s toast when smiles give way to looks of horror. Ivy’s twin sister, Amy has been murdered! Turns out, the poison that killed her was actually meant for David. But who wants him dead? A rival vintner? Or someone closer to home? This time the truth may be a bitter vintage to swallow.

Back Cover of “Dandelion Dead”