A Fatal Chapter by Lorna Barrett is available in paperback on May 3!  Yes, this is a big deal and we are super excited.  Hardcovers are fun, but there is nothing quite like a paperback.  So, you haven’t read it?  Great!  Here is your chance.  A Fatal Chapter  is the ninth book in the Booktown Mystery Series that takes place in New Hampshire. The reader once again gets to visit with Tricia Miles, owner of “Haven’t Got a Clue Mystery Bookstore” and her sister, Tricia Preston and precious cats, Miss Marple and Dainty Cat.

So, curious what it’s about?  Before you buy “A Fatal Chapter” (because you know you’re going to get it) here is what it’s about, straight from Ms. Barrett’s site, http://lornabarrett.com/ .

Suddenly, Sarge began to pull at the leash and bark. Tricia held her ground, looking 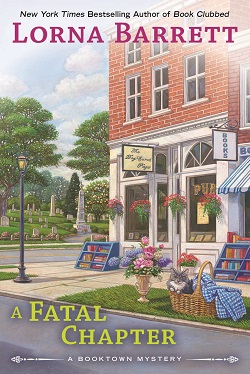 around for the squirrel the dog had no doubt seen but which she couldn’t locate. Sarge barked even louder and fought to pull her toward the gazebo.

“Oh, all right. You can have a look. But when there’s nothing there, you’re going to feel pretty foolish,” she admonished the dog.

But she’d been wrong. There was something in the center of the edifice.

Tricia halted, her heart skipping a beat when she saw the pair of rather worn leather loafers attached to a pair of legs. She hurried up the steps to see a man lying face down. Crouching beside him, she held out a hand and forced herself to touch him. The skin was still warm. She stared at his chest and noticed he was still breathing. She reached and grasped his wrist and found a weak pulse.

She let out a breath. Thank goodness this one was alive. She’d found more than her fair share of corpses during her tenure in Stoneham. Sarge had stopped barking and did what dogs do best—held a sniff-athon, his nose taking in as much of the fallen fellow as possible, considering how tightly Tricia held the leash. She thought she recognized the clothes and the hair, and scooted around the still form until she could see that it was indeed Pete Renquist. What on earth was he doing lying unconscious in the gazebo on such a lovely summer’s day? He didn’t seem to be bleeding. As far as she knew, he didn’t suffer from seizures, but he obviously needed medical attention. Tricia pulled her cell phone from her slacks pocket and punched in 911. Seconds later, a voice spoke in her ear.

“Hillsborough County 911. Please state your name and the nature of the emergency.”

“My name is Tricia Miles. I’d like to report an accident in Stoneham Square. A man’s been hurt.”

“Hurt how?” the dispatcher asked.

“I’m not really sure. He’s lying in the gazebo and he’s unconscious. He seems to be having trouble breathing. Heart attack maybe? His pulse is rather weak.”

“Do you know how to perform CPR?”

“I’ve never had to do it, but I think I could if necessary,” Tricia said, her fear escalating.

“The Stoneham Fire Department’s rescue squad has been dispatched—” Sure enough, Tricia could already hear the squad’s siren. “Please stay with the victim until they arrive.”

The word victim made her shudder. “Of course I will.”

She ended the call and spoke to the man beside her. “Pete? Can you hear me? It’s me, Tricia. Help is on the way. I’m sure everything will be all right. Just hang on.” She said the words with what she hoped was reassurance, crossing her fingers they’d be true.

Pete’s eyes shot open, startling Tricia. His arm jerked up and he grasped Tricia’s arm with what could only be described as a death grip.

His lips moved, and she bent down to listen, but couldn’t hear what he was trying to say. “I don’t understand,” she said.
She bent lower so that her ear was close to his mouth.

“I never missed my little boy,” he said, gasping. His eyes closed and the grasp on her arm slackened as he fell into unconsciousness.

The rescue squad pulled up to the sidewalk and the EMTs practically spilled from the vehicle. They paused to grab their gear before jogging to the gazebo.

Sarge’s barking went back into overdrive. “Hush!” Tricia said, but she didn’t have the same kind of control over the dog as her sister did. He strained at the leash and Tricia hurried down the steps to intercept the EMTs. She scooped up Sarge and his barking quieted; instead, he began to growl at the newcomers. “Hush!” Tricia told him again, still without results.

Tricia recognized one of the EMTs as Danny Sutton. “It’s Pete Renquist,” she told him. “I think he might have had a heart attack.”

He nodded. “We’ve got it,” he said and he and his partner hurried up the stone steps to attend to their patient.

“Tricia!” Russ Smith called, running across the grass toward her. He’d no doubt heard the call for the EMTs go out on his police scanner. He had his camera slung around his neck and held his ever-present steno pad and a pen in hand.

Tricia stepped away from the gazebo, walking fast to close the space between them. “It’s Pete. I found him.”

Russ looked toward the gazebo. “Poor guy. Did he say anything to you?”

“Nothing that made sense.”

They turned their attention to the road where an ambulance pulled up at the curb and another set of EMTs were soon hurrying to join the firemen, hauling a gurney along with them.

Tricia and Russ edged away, yet remained close enough that they could hear the EMTs.

“Well, at least he started out alive,” Russ said.

“Hey, don’t count Pete out yet,” she grated, glaring at him.

They watched as the EMTs worked in a fluid motion to transfer Pete to the gurney and whisk him off to the ambulance. By then they noticed a bunch of rubberneckers that had gathered around the edges of the park and were watching the show. Poor Pete.

Less than a minute later, the ambulance took off with its siren wailing. Sarge began to wiggle in Tricia’s arms and she set him down on the ground. The firemen packed up their gear, stowed it in their squad, and left the scene.

With the show now over, the gawkers began to drift away.

“That’s it,” Russ said. He cocked his head and addressed Tricia. “What were you doing in the park, anyway?”

She brandished Sarge’s leash. “What do you think?”

He shrugged, looking back to the road, then at his watch. “Looks like Pete and I won’t met to talk about that article after all. I sure hope the poor guy makes it.”

Heavy-hearted, Tricia looked toward the road where the ambulance had receded from sight. “Yes, me, too.”

Buy “A Fatal Chapter” in PAPERBACK on Amazon by clicking the book below!