I have not had the pleasure of reading any of GiGi Pandian’s works before so I went into this read completely blind. The cover is what captivated me and from there I went to the description. That’s when I knew I wanted to read it. Being a fan of mystery and exploration, a character such as Jaya Jones was going to help me escape on a much-needed vacation and explore my need for an exotic location. I grew up watching Indian Jones and always thought the females in his movies seemed pretty week. The thought of a female exporter fascinated me. I only hoped Jaya lived up to my expectations.

We have two females who are the main characters and focus of this story. Yes, there is a brother, his girlfriend and Jaya’s two love interests that form an uncomfortable love triangle, but I’m not sure those are the focus really.  So, I am focusing on the two main ladies.  One ends up dying, people thinking her a fool and dreamer while one goes on to explore this dreamer’s theories. There are lots of plots and twists in the book, but these two ladies and how their relationship is with each other is the thing I would like to focus on.

Lilith Vine was once an impressive professor of Jaya’s, but she and others left professor Vine behind in fear of having the stigma of “crazy dreamer” put upon themselves. After all, a real researcher can’t have that shameful of a person them around. Her fifteen minutes of famed discovery was over and she was a has-been, right? Yet, when professor Vine calls up Jaya and tells her about a connection between a world-famous artist and a set of carved statues in Italy, she can’t seem to pull herself away. Even after leaving her behind, Jaya knows deep in her heart that she looks up to Lilith Vine and that the quirkiness of her ideas makes her adventurous heart skip a beat with anticipation of the unknown.

Unfortunately, a prominent death occurs that puts a damper on the research but this drives Jaya even harder to find out if there is truly a historical connection. She is led to Italy to talk to the distant family of the artist in question and finds out of the shame associated with him, the scandal of his work and just how far people will go to manipulate others to get what they want.

I loved the adventure, the characters, the scene setting and development that goes on in Michelangelo’s Ghost. Jaya goes from a researcher who is not sure of herself to one who gains a full head of steam toward her better self. The character of Jaya did not disappoint.

Anyone who likes adventures and strong female characters will fully envelope this book. I was constantly “watching my back”, trying to figure out who was after who and if people where truly who they said they were. There is no sense of security for Jaya in this book and it’s an spree to the very end. I can’t wait until the next installment. I’m now a huge Jaya fan and plan to read the prior ones now. 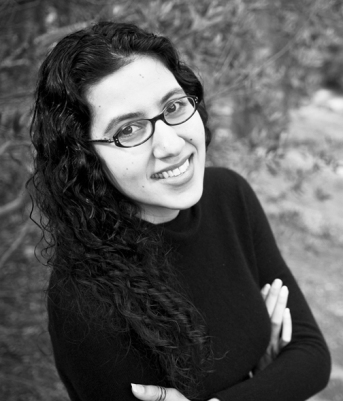 SA Today bestselling author Gigi Pandian is the child of cultural anthropologists from New Mexico and the the southern tip of India.

She graduated with honors from Pitzer College, studied abroad at the University of Edinburgh, and went on to graduate school at the University of Washington in Seattle and the University of Bath in England. Before completing her PhD, she realized she was much better suited to writing about the fictional adventures of academics than being one herself. She left academia for art school, and began writing the Jaya Jones Treasure Hunt Mystery Series.

Artifact, the first book in the series, was awarded the William F. Deeck Malice Domestic Grant, hit the USA Today bestseller list, and was named a “Best of 2012” Debut Mystery by Suspense Magazine.

In addition to novels, Gigi loves writing locked-room mystery short stories. Her story “The Hindi Houdini” was shortlisted for Agatha and Macavity awards.

Gigi’s publishing journey was kicked into high gear by a cancer diagnosis. A month after her 36th birthday, Gigi was diagnosed with breast cancer. To get through her treatments, she decided to throw herself into her mystery writing. She’s doing well, but life is still uncertain, so she plans to have a lot of fun in life as she travels the world with her husband, camera, and notebook for writing mysteries.

Gigi sits on the board of Sisters in Crime, is a member of Mystery Writers of America, and is an avid participant in National Novel Writing Month