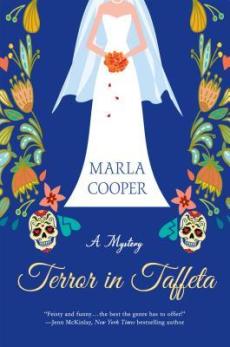 “Maybe I should have been a funeral planner instead…”

Kelsey McKenna is a wedding coordinator by most standards. She schedules the church or beach for the big day, destination of the couple’s dreams, helps with the dresses and even deters some of the drama every wedding party is bound to have. It’s a piece of wedding cake, as she has seen and done and seen it all. Not so fast there.   At her most recent ceremony held in the beautiful San Miguel de Allende, Kelsey never imagined she would be responsible for handling the mystery of a death, make that two.  The worst part?  The mother of the bride is the one holding her to it. That’s what she’s paid for, right?

Terror in Taffeta is just that, one terror and problem after another and poor Kelsey is the one who is having to do all the foot work with absolutely no thanks from the horrid mother of the bride. I loved hating the character of Mrs. Abernathy.  She was haughty, cold, filthy rich and the perfect mother-zilla in this story. Kelsey and Mrs. Abernathy butt heads the entire book. It’s gets pretty ridiculous.  I kept waiting for Kelsey to take her out.  I found myself saying this aloud while reading.  (My husband just looked at me strangely and let me be.)  Thank goodness for Kelsey’s best friend and photographer, Brody. This dynamic duo work their magic to not only get into more trouble but to eventually solve a very complex mystery. And, Kelsey might have a love interest along the way, maybe.  That’s up in the air several times.  I’m not sure what to make of him honestly.  You’ll see what I mean.

I am not a big fan of weddings or wedding stories. There I said it. I worked as a wedding photographer for many years after college. I know how crazy they can be and so when I first saw this was about weddings, I was cautious. Well, I am so glad I read this because Marla’s writing style and voice made me laugh, cover my mouth with shock and scratch my head many times. The sarcasm and humor in this is amazing. I love it. There was never a moment where I was bored or wishing I was reading something else. I could relate to the crazy family members brought up in this. Oh, Mrs. Abernathy…..Bless her heart.

Marla did a great job making me look another direction while she was hiding the real murderer in another location. The plot twists were fantastic and kept me guessing. Honestly, it would be hard for another wedding coordinator book to top this. Kelsey is amazing and I just might want to hang out with her and snap a few shots with Brody.  Now where is my SLR?

MARLA COOPER was astonished when, at the age of 18, she realized people could actually get paid to write things. So she switched her major from business to advertising—much to the relief of her accounting professor—and began her career as an advertising copywriter. She later became a freelancer so she could take advantage of perks like working in her pajamas, and now she writes a little bit of everything. It was while she was ghostwriting a book on destination weddings that she found inspiration for her first novel, Terror in Taffeta. Originally hailing from Texas, Marla lives in Oakland, California, with her husband and her polydactyl tuxedo cat.