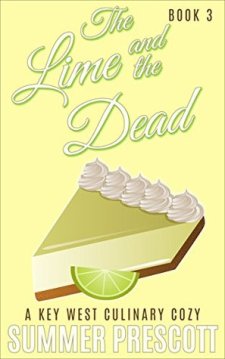 The Lime and the Dead by Summer Prescott is set in a small cottage in Key West. The main character, Marilyn Hayes, is the owner of a sweets shop called Sublime Sweets that specializing in her signature Lime Pie. Her only daughter, Tiara, helps her run the shop.

The third installment of the Key West Culinary series starts as Marilyn is losing her favorite neighbor and sweet friend, Madge Prentiss while gaining a creepy, borderline stalker by the name of Tim Eckels.  While looking for a qualified baker, Tim starts showing up in more and more unusual places after not being hired for the position. Marilyn starts to get worried as she digs up background information on him and finds out about his past run-ins with the law.

After hiring new baker, Kelcie Williams, Tiara brings news that a realty show want to film a segment in Sublime Sweets. Hoping this brings more business, Marilyn agrees and things start to take a turn for the worse when one of the stars sneers at her beloved pie. After Tiara and reality star, Bella Fontaine, have words in the shop, Bella goes missing.  The producer, Sabra Remington,  asks Tiara to replace her temporarily. Then the worst happens.  Bella is found dead in Marilyn’s back yard by Tim Eckels.

The ending is a true surprise. Who killed Bella?  Is it Marilyn, Tim the new neighbor, Sabra, the show’s producer, Tiara or someone else associated with the show or shop?

ll the books before it. I felt like I knew the characters through their actions. Summer didn’t tell me, she showed me and I like that. I loved the interaction between the characters weather they were being happy over being dramatic. I got the gist of who they were.

The action happened at the beginning of the book in the second chapter. I don’t like waiting and I didn’t have to in this book. Creepy Tim came to the rescue and made me start wondering about him. I also like that someone went missing pretty early so I had time to try and solve the murder with the characters. Then of course, I was surprised by who the murderer was. Ya, I didn’t see that coming and I love when that happens. I had two people on my list and neither one had anything to do with it.

The Lime and the Dead is a fairly short and fun read at 161 pages. And like I said earlier, you don’t need to have a previous relationship with these characters to enjoy it because I loved it and this third installment was the first of the series I have read. Good news though; I do plan to go back and read the other.